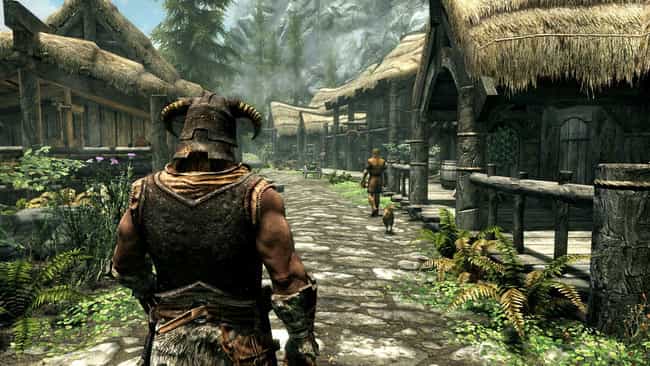 Even after defeating Alduin, the World Eater, there’s still so much to do in The Elder Scrolls V: Skyrim. Players can embark on a plethora of side quests, guild missions, and other tasks that will keep them exploring for well over 200 hours.

After the game was released, Bethesda put out three expansions packs — Dawnguard, Hearthfire, and Dragonborn — that add even more content to an already sprawling game. Hearthfire gives players the option to build houses and adopt children, which means that one could theoretically live a virtual life in the game forever.

To top it all off, Skyrim’sRadiant Quest System — which generates quests for you based on your progress in the game — insures that there will always be something to accomplish in the game.

Even in an age where the average blockbuster game clocks in at around 80 hours, The Witcher 3: Wild Hunt is still abnormally massive. Speedrunners have been able to reach the credits in about 25 hours, but this feat requires a completely bare-bones playthrough. Factoring in the countless side quests, contracts, and hidden events strewn throughout the game, the average player will spend around 200 hours making their way to the end (and that’s optimistic).

Discounting all the planned encounters, another big factor in The Witcher 3’s unbelievable length is how vast the game’s world is. The continent is separated into several different regions with cities, towns, and villages spread throughout. Every town has an eclectic population of NPCs to interact with, and the wilds are filled with hidden treasures and treacherous caverns.

Disregarding Dark Souls II’s crazy length and plethora of achievements/trophies, the sheer number of boss battles in this game makes completion a near-impossible task. Some bosses are optional, which is a small reprieve, but perfectionists won’t be able to accept the easy way out. You have to be a straight up masochist to deal with the game’s insane difficulty, and there’s no tutorial to explain the franchise’s many systems and statistics (if you want to get good, you’ll have to consult a fan-made wiki).

The task of completely finishing this game is one of biblical proportions.

Fallout 3 is basically impossible to 100%, as many of its missions have multiple potential outcomes and some companions can only be obtained if you have a specific karma level. Additionally, you have to find all of the bobble heads that are hidden throughout the ruins of the DC area. Once you’ve completed all the base game’s story missions, side quests, and other interactions, there are five hefty DLC packs that add in a whole lot more content.

All but one of these add-ons increases the size of the map, so that players can explore parts of Pennsylvania and Maryland once the nation’s capital starts to feel samey.

According to developer BioWare, it can take a player anywhere between 150 to 200 hours to complete all of the content in Dragon Age: Inquisition. Even if you stick to the main story, it’ll still take you around 20-40 hours to reach the end. However, once you reach this point, chances are you’ll be so immersed in the continent of Thedas that you’ll spend countless more hours exploring the rest of the world.

While the base game is massive, there are also five expansion packs that add new storylines, missions, regions (among other things) to the core experience.

In order to 100% Grand Theft Auto V, you need to do a lot more than simply finish the story, which is very long to begin with (there are 69 story missions in total, all of which feature optional bonus objectives). You also need to complete 20 strangers and freaks missions, 14 random events, 42 hobbies and pastimes, and 16 miscellaneous tasks.

Then there are the collectible in-game challenges, such as time trials, stunt jumps, hunting missions, and hookups with random strangers. If you’re hoping to complete the game, you better start sharpening your virtual tennis skills.

In case you’re not aware, the true antagonist of the Batman: Arkham series is its collection of Riddler trophies, which are strategically hidden all throughout Gotham. While you can choose to ignore these collectibles in the first few games, Arkham Knight forces you to find all 243 of its Riddler trophies to reach the true ending, which is still a cliffhanger.

8
The Legend Of Zelda: Breath Of The Wild

According to Kotaku, the first successful 100% speedrun of The Legend of Zelda: Breath of the Wild took 49 hours to complete, which should tell you something about the game’s length. For players in less of a hurry, it will take even longer time to see and do everything this massive Nintendo game has to offer.

Forget the story areas and side quests, the biggest challenge of all is staying focused on one specific task. After all, Breath of the Wild encourages players to simply explore the world, without leading them by the hand to the next objective. As a result, it’s easy to find yourself walking around aimlessly, admiring Hyrule’s natural beauty without a care in the world.

The second chapter of Metal Gear Solid V: The Phantom Pain begins 31 missions into the story. To reach this point, you’ve spent dozens of hours sneaking around, kidnapping goats, hanging out in a box, and jamming out to ’80s cassettes. Now, the game requires you to replay the majority of the levels on a much harder difficulty. To be fair, the story does continue with new, previously unseen cinematics, so the second half of the game is only a moderate rehash.

Beating the second set of missions unlocks the game’s true ending, which reveals the shocking truth about Big Boss, and details the events that lead to the first Metal Gear Solid game. While this is definitely a worthwhile payoff, holy Hell is the journey to get there tedious.

Stardew Valley isn’t really about “winning,” which is why you’ll never finish it. Once you’ve played for three in-game years, you’re given an assessment that gauges your success up until that point. After you’ve been analyzed, the game continues on indefinitely, and players unsatisfied with their score can be reevaluated at any time.

The seasons roll on without end, and that’s actually a good thing, as planting turnips, exploring caves, managing resources, fishing, and interacting with NPCs is absolutely addictive. Once the theme music gets stuck in your head, you might even wish to become a permanent resident of Stardew Valley.