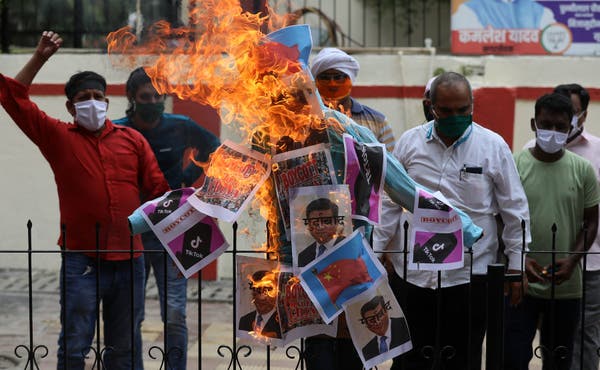 Tensions between Indian and Chinese troops have simmered since early May in the remote, high Karakoram mountains that separate India’s northern Ladakh region from the alkaline desert of Aksai Chin, which is claimed by India but controlled by China and abuts its Xinjiang province.

It is a forbidding landscape of cold deserts, snow-capped peaks, sparse vegetation and freezing temperature about 14,000 feet above sea level. On Monday evening, in a brutal hand-to-hand battle, Chinese soldiers killed at least 20 Indian soldiers with wooden staves and nail-studded clubs, in the severest escalation of the dispute on the Sino-Indian frontier in decades.

British colonial authorities bequeathed India a border with China that was neither delineated on a map nor demarcated on the ground. After China invaded Tibet in 1950 and the two Asian giants sought to formalize their frontier, the territorial dispute emerged. The Sino-Indian border dispute involves about 13, 500 square miles in Ladakh and Aksai Chin and about 35,000 square miles in the northeastern Indian state of Arunachal Pradesh, which China calls South Tibet.

In 1962, the border dispute flared into a war. China won conclusively but retreated after a cease-fire to what were broadly its prewar positions. That de facto border, which is called the Line of Actual Control, is patrolled by both armies. Occasional unarmed clashes have taken place over the years despite five agreements aimed at reducing the risk of combat.

China has built a network of roads and tracks on its side of the Line of Actual Control, but the Chinese military has consistently objected to India’s far slower but steady improvement of borderland infrastructure.

One of the key Indian projects is the construction of the Darbuk-Shyok-Daulat Beg Oldi road in Ladakh, cutting through treacherous mountain ridges as high as 16,000 feet. The road runs almost parallel to the disputed border with Chinese-controlled Aksai Chin and reaches Daulat Beg Oldi, an Indian military base and landing ground for the Indian Air Force, about 12 miles from Karakoram Pass, which separates Ladakh from Xinjiang.

The road, which includes 37 bridges built over snow-fed rivers, took 19 years to construct, providing India the ability to move its troops with much greater speed toward Aksai Chin and Karakoram Pass. On Oct. 21, India’s defense minister, Rajnath Singh, inaugurated a major bridge on the road, which made it completely operational even in the summer melt, when the rivers are in spate.

China saw the road as reducing the power asymmetry between the two countries and threatening its interests. Two and a half months earlier, an aggressive political move flaunting the muscular nationalism of Prime Minister Narendra Modi’s “New India” had not gone unnoticed in Beijing. On Aug. 5, Mr. Modi’s government unilaterally abolished the constitutionally guaranteed semiautonomous status of the northern state of Jammu and Kashmir, which is disputed among India, Pakistan and China.

Beijing objected. Hua Chunying, a spokesman for China’s foreign affairs ministry, described Mr. Modi’s move as undermining China’s territorial sovereignty and warned, “Such practice is unacceptable and will not come into force.”

New Delhi ignored it. In November, Survey of India, the cartography department of the Indian government, published new maps of Ladakh and Jammu, and Kashmir. The new official map continued the tradition of the Indian claim on Aksai Chin by placing it within the boundary of Ladakh.

In the high altitudes around the disputed Indian-China border in the Ladakh region, the bitter winter stretches until April and even May. In between, the coronavirus pandemic took over the world. But Beijing had neither forgotten nor forgiven.

Between May and June, the Chinese military seized about 40 square miles of Indian territory, including an area known as the Galwan River valley. The high ridges of the Galwan valley overlook the strategic Darbuk-Shyok-Daulat Beg Oldi road leading toward Aksai Chin and Karakoram Pass. The seizure of the Galwan River valley allows the Chinese Army to watch the road and, when necessary, bring down artillery fire to preclude its use, rendering a significant strategic asset inoperative.

India protested. On June 6, Indian and Chinese military officers started talks to de-escalate the crisis. The Chinese agreed to vacate some positions. On the evening of June 15, an Indian Army patrol set out to verify whether the Chinese had withdrawn from positions on the Indian side of the Line of Actual Control.

According to the Indian officials, the Chinese had not withdrawn as agreed, and several hundred Chinese soldiers ambushed the Indian patrol. The Chinese claim they were on their own side of the Line of Actual Control when the Indian soldiers crossed over and attacked them.

While both Indian and Chinese soldiers carry weapons when they patrol the border, it has been a longstanding practice, in accordance with agreements signed by the two countries in 1996 and 2005, not to use firearms during patrol clashes. Brutal hand-to-hand fighting followed in which the Chinese killed at least 20 Indian soldiers , pushing some of the wounded over the steep cliffs overlooking the Galwan River.

Beijing has admitted that there were Chinese casualties but has not given any details. New Delhi has not officially claimed any count of Chinese casualties either, but the Indian press and social media claim, with no evidence, that 43 Chinese soldiers were killed.

A shocked and stunned New Delhi took a full day to release statements acknowledging the debacle. In sharp contrast to the bellicose Indian statements that follow attacks by Pakistani militants, the Indian government’s reactions were mild, almost careful not to offend China.

Only on Wednesday did Mr. Modi discover his voice and declare that “peace-loving” India would ensure that the deaths of its soldiers would not go in vain. India’s foreign minister, who rarely holds back in railing against Pakistan, was restrained in his criticism of Beijing and agreed with his Chinese counterpart to “cool down” tensions on the ground “as soon as possible.” The reasoning was underlined by Rajiv Pratap Rudy, a spokesman of Mr. Modi’s party, who argued on television that the confrontation was “with China, not with Pakistan.”

With China not stepping back from the territory it has captured and the deaths of Indian soldiers, India’s beleaguered opposition parties are cornering the government and asking: Can Mr. Modi, who makes political capital out of his muscularity in dealing with Pakistan, adopt an entirely different set of standards in dealing with China?

Over the years, Mr. Modi has invested a great deal of personal and political capital into building a relationship with President Xi Jinping, whom he hosted in his hometown, Ahmedabad, during a state visit to India in 2014.

Mr. Modi also set up India as a soft target through his pusillanimous handling of an earlier border crisis in 2017 at Doklam, at the disputed tri-junction of China, India and Bhutan. This ended without bloodshed after a 73-day eyeball-to-eyeball confrontation between Chinese troops and the Indian Army.

New Delhi was content with taking political credit for resolving the Doklam crisis peaceably, but the Chinese military violated the “mutual withdrawal” by sending troops and equipment back into the disputed area. Mr. Modi’s government chose to do nothing about the remilitarization of Doklam by the Chinese military. Beijing could have drawn a lesson from it: Seize disputed territory at multiple points, withdraw from a few places, and let New Delhi claim that as a victory.

After the Doklam crisis, Mr. Modi met Mr. Xi in Wuhan in 2018 and in India last year. Mr. Modi hailed both summits as harbingers of a new strategic convergence with China. The Wuhan summit particularly had significant outcomes that were described as building a “consensus” between the two sides to deal with border tensions.

New Delhi’s diplomatic behavior has been thoroughly subservient to China since the Wuhan summit, with no significant criticism of China over Taiwan, Hong Kong, the coronavirus pandemic or Mr. Xi’s ambitious Belt and Road Initiative.

India’s opposition parties are portraying Mr. Modi’s embrace of Mr. Xi as a grave misjudgment. The outrage over the killing of Indian soldiers leaves Mr. Modi’s strongman image dented and confronts him with the difficult choice of appearing to stand up to China while preventing a full-scale war. Mr. Modi’s party has responded by aggressively arguing that the fallen Indian soldiers killed 43 Chinese soldiers, despite the absence of any proof.

For Mr. Xi, the agreement reached with Mr. Modi at Wuhan in 2018 to rein in their troops and to resolve border tensions through peaceful negotiations seems to have been clearly expendable. The Chinese president’s image has been dented by his handling of the coronavirus outbreak; the setback in Taiwan, where pressure and subliminal military threats resulted in the re-election of the anti-unification president, Tsai Ing-wen; and Beijing’s failure to clamp down on anti-China protests that continue roiling Hong Kong.

Given China’s growing incursions in the Senkaku Islands, claimed by both China and Japan, its increasing assertiveness in the South China Sea and the new security law in Hong Kong, Mr. Xi would not have lost much sleep over violating the five border agreements signed with India between 1993 and 2013.

Some analysts believe that just as Mao Zedong strengthened his control over China by going to war with India in 1962 and crushing it militarily, Mr. Xi is burnishing his strongman image by slapping down an India that is growing uncomfortably close to the United States.

Mr. Modi, his China policy in tatters, confronts the question, should New Delhi accept assistance from Washington to handle the crisis? Since May, American political officials have communicated Washington’s support to New Delhi repeatedly, but Mr. Modi has replied that India is capable of handling the situation and that diplomatic and intelligence support from Washington would suffice.

For the Sino-India border, the current tensions have destroyed the existing playbook, which had maintained peace since 1993, when the two sides signed the Border Peace and Tranquillity Agreement.

If China withdraws from the Indian-claimed territory it has occupied, the two sides could negotiate new border agreements and operating procedures. But if China holds on to what it has gained, India would most certainly shift more overtly toward Washington.

(N.B: This story has been published on a third-party source.)